Last afternoon, I’d been to an old-age home as a photographer for a volunteering organization called Serve the City in Leuven, Belgium. Glad to share some scenes I witnessed there.

Scene 1: A few high school students had volunteered to make pancakes for the old people of the Home <old people referred to as zestful people in my account below> and also to serve them at the dining table. It was nice to see a bunch of zestful people having their meal – some of whom had to be fed. Most of them wore an expression of hope. One of the zestful ladies was really keen on communicating with us youngsters. Unfortunately, she spoke only Dutch. I exchanged a smile with her, took a picture and showed it to her. She seemed happy.

Scene 2: I went around the Home. The common areas like the living room and dining room looked plush. I got an opportunity to take a peek into one of the bedrooms, as the door was wide open. Wow, it looked like a room of a five-star hotel! That room had framed photographs and flowers around, with a cot in the centre. 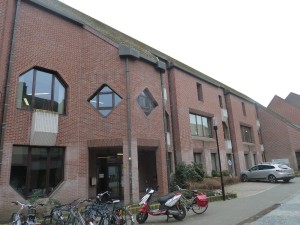 Scene 3: I met an official from the Home in the living room. I greeted him and asked him a few questions to whet my curiosity. He happened to be R, an occupational therapist, working with the Home since eight years. In all, there were about 75 zestful people living there with their average age being 80 years. There were three divisions (housing 25 each) in the Home, two of which were closed to the outside world and one open. In the “open” division, the zestful people were free to walk in and out of the Home as they pleased. The criterion for admission into the Home? They should have nobody to care for them on a full-time basis. Well, were they all happy in the Home? Can’t say so for all. Some of them missed their loved ones while some of them suffered from physical/mental ailments. Who treated them? An in-house doctor of course. They had visiting physicians, psychologists, physiotherapists, etc. Beauticians too visited them on need basis!!! Well, I did see a zestful woman (perhaps in her mid-80’s) on a wheel-chair neatly decked up with mascara, lipstick and matching accessories. I could see that “never-say-die” attitude in her. (A salute to her!)  How much did one have to pay to live in the Home? Well, it was a mighty sum of money. You needed to add the expenses of the doctors and beauticians to this! Phew!

One portion of the Home’s garden

Scene 4: My Polish friend thanked me for the “interview” I conducted with R.  I appreciated the cleanliness of the Home and the friendliness of the staff. I only hoped all those zestful people lived there happily in their twilight years. All they needed was love and care with a personal touch. I then went to the garden to take a glimpse of it before bidding adieu to the Home.

A meaningful afternoon that was! Hope to go there again. I was reminded of my visit to one such Home in my country long ago.

It was a sunny morning. Yours truly travelled from Leuven in Belgium to Rotterdam in The Netherlands by an express train. Reached Rotterdam by 9 am and then headed straight to the tourist info centre close to the station. As usual, bought a city map and I was looking forward to the expedition in the second-largest city of The Netherlands. 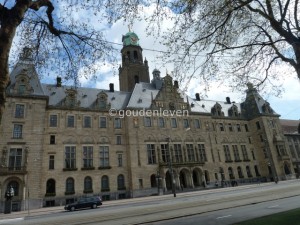 The City Hall in Rotterdam

Rotterdam is an international commercial hub thanks to its strategic location by the North Sea; it is also the second largest port in the world. Rotterdam has many (maritime) stories to narrate. It was destroyed in World War II. But the city’s spirit of survival and revival has made it one of the sought-after habitable places in Europe.

Well, it was no surprise to see a busy city mostly abound with students, as it is home to popular portals of higher learning such as the Erasmus University Rotterdam. Classy buildings made the skyline – no wonder the city is famed for its modern architecture. I walked passed many historic buildings such as the Stadhuis (the city hall), the Witte Huis (White House), Euromast (an observatory tower), Beurs – World Trade Centre, the Erasmus Bridge, etc. 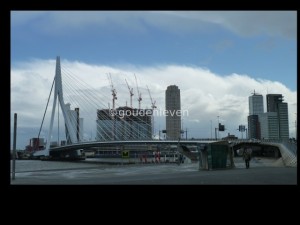 The Erasmus Bridge is a cable-stayed bridge that connects the northern and southern parts of the city. It looked damn cool. It apparently made it to Jackie Chan’s movie, Who am I? 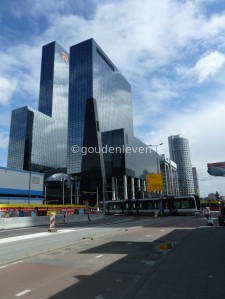 The Gebouw Delftse Poort (Delft Gate Building), close to the central station, is one of the tallest twin tower complexes in the entire country.

I came across a peculiar structure in the city called Cascade and I was told it was built to represent a growing consumerist culture where natural resources are slowly depleting. I got an opportunity to visit Het Haven Museum (The Harbour Museum) where miniature historic ships from ancient times were kept and stories of such ships were made available through printed materials as well as multimedia devices neatly housed within the museum. 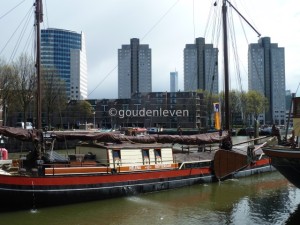 Helena in the Harbour Museum

There was also a unique exhibition of those original ships lined up on the dock, of course with a neat description of each of them. (Quite strangely, this particular open-air museum hasn’t made it to many of the must-visit-places’ lists of Rotterdam; also there is no entry fee!) I met a couple of senior citizens who happened to be siblings. They told me that their father used to work for the shipping industry there. They felt nostalgic as they pointed to the ship named Helena in which their father used to sail.

Close to the Harbour Museum, a Walk of Fame was seen where celebrities had left their handprints behind. It was 1:30 pm and the weather was at its unpredictable best mood. Before the onset of a second cloud-burst, I wanted to head to my next destination, which was a restaurant. But, btw, I’d chanced upon a handprint of Bryan Adams.

I traversed the plush-looking shopping areas of Rotterdam: Lijnbaan and Hoogstraat. These did have all the popular brands of Europe. I could manage only a quick window-shopping due to paucity of time. I next took a metro to a local university where I had to meet a friend, P. She took me around and then we had dinner at an Indian restaurant together with her mother. It was a nice evening.

It was time to head back to my abode, which was a cuboid. Yes, a cube-shaped room took care of me that day. Well, I’m referring to the famed Cube House of Rotterdam!

Can you locate the Cube House?

"Learn from yesterday, live for today, hope for tomorrow. The important thing is not to stop questioning." - Albert Einstein